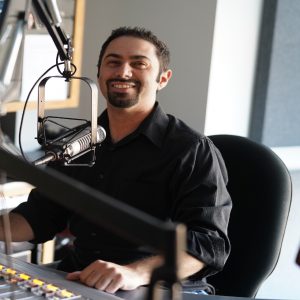 Sam also has spent over 25 years in radio, hosting Playboy Radio’s The Couch on Sirius/XM, as well as being the resident “Sexpert” on Sirius/XM Radio Sex. Sam has also hosted AM570 RAW on KLAC, and is currently a producer/ fill-in host on KFI AM640 in Los Angeles.

In addition to producing Elevated Intimacy with Ashley Manta, Sam also cohosts Forbidden Talk, a podcast aimed at opening up honest communication of sex, and relationships for the Middle Eastern community in the US.